Katyannagh has had her third foal. Her first colt foal, "Spud" is already full of mischief! Sapphire is the overall winner of the the intermediate showjumping class of the Ettrick Forest Rider's Association's winter league. He also took first place in several of the dressage tests over the course of the season, but did not win any of these classes overall. Full results of the season's winners can be seen on EFRA's website here: www.ettrickforest.co.uk/forms/Winterleaguewinners2016.pdf.

Two of Tamarisk's foals are currently competing in the 2016 Ettrick Forest Rider's Association winter league. Sapphire and Cornelian have both won in separate showjumping classes and Sapphire has placed or won in the dressage several times. Full results for the winter league can be seen on EFRA's website here: www.ettrickforest.co.uk/results.php. 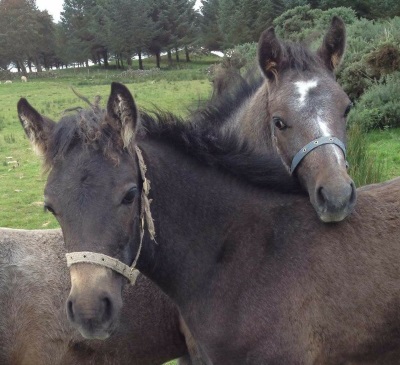 In May two purebred foals by Garnet were born: May Celebration, a filly out of Mayflower and Spruce, a colt out of Maize June. Both foals are already sweethearts who are easy to work with. They are expected to go grey and to reach between 14-14.2hh.

In the first half of 2016, Sapphire, Cornelian and Rose Quartz were spotted several times out and competing at the same competitions over various levels, with places being taken quite a few times!